I am thrilled to be hosting a spot on the POIKO by Brian Middleton Blog Tour hosted by Rockstar Book Tours. Check out my post and make sure to enter the giveaway! 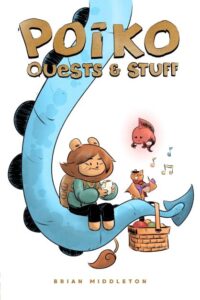 A new adorable anthropomorphic adventurer awaits, and his name is Poiko! Perfect for fans of Mouse Guard, Little Robot, and Hilda!

THERE IS NO SUCH THING AS AN “AVERAGE” DAY FOR POIKO!

Have you ever had to deliver a care package to a dragon with allergies? Have you ever been waylaid by a school of space fish? That’s just an average day for Poiko, the kingdom’s most reliable courier. The world can be a big, scary place, but it can also be wondrous. Sad things can happen, but there are always good friends to turn to, or new friends to make. And no matter what, there is always, always someone who could use your help. Poiko learns all these lessons and more every time he brushes his tail, pulls on his hoodie, and steps out into a new adventure. The philosophical whimsicality of Calvin & Hobbes meets the fantasy-scapes of Adventure Time in this modern-day classic.

“Poiko: Quests and Stuff will delight young readers and drop them into a world that’s magical and interesting while reflecting something incredibly human in the way the characters interact with their community.” — Eliza Viera ― Gate Crashers

Book Playlist
Kensie the bat has a love for punk music, inspired by the fictional band, Augustus and the Mane Thing, who make their appearance in the third story in Poiko: Quests and Stuff. So we will need some punk, rock and ska for this playlist! But let’s keep it PG. This is an all-ages read, after all! 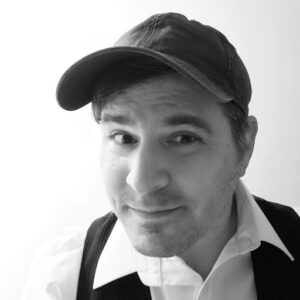 Brian Middleton has been telling stories in one form or another for his whole life. His first comic book (published by his brother’s 4th grade teacher and the school’s copy machine) sold out at the distributor level. After that there was no looking back! He continued drawing as the years went on and wrote several short stories. Eventually he married the woman of his dreams and together they started a family. At this point his mind began to drift back to his first creative passion: comic books! After dipping his toe in the water with a handful of self-published and work-for-hire comics he decided to take the deep dive and create his first series, Wulfborne. The three issue mini-series, published by Scout Comics, released in February 2019 to rave reviews. The comics review site, Reading With A Flight Ring, called the book “an understated masterpiece of fiction” and called Brian “a madman, a fool and a genius”, which, as far as anyone knows, is all true. With the creation of Wulfborne complete Brian has turned his creative attention toward his next project, Poiko: Quests and Stuff. The rest of his attention is focused squarely on his one wonderful wife, two beautiful daughters and six (feel free, dear reader, to fill in here the adjective of your choice) cats.

2 winners will receive a finished copy of POIKO, US Only.