I am thrilled to be hosting a spot on the FIX YOU by JC Doan Blog Tour hosted by Rockstar Book Tours. Check out my post and make sure to enter the giveaway! 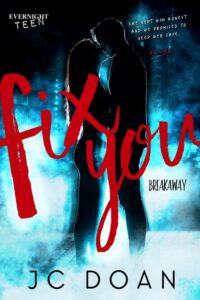 Cade Henson was ready for a change. After high school, he’d agreed to be a bouncer for his sister’s club, not a dancer. Yet over the course of a year, he’d watched his own life slowly spiral out of control. Until the night he decided it was time to risk it all.

Rynn Lewis was eighteen and pregnant, on the run from her ex-boyfriend, when Cade found her on the streets of Minneapolis. She taught him about friendship and family. She kept him honest and he promised to keep her safe.

Rynn leaned forward to pull down the visor mirror and promptly did a double-take. “God, Cade, I look like crap! Why didn’t you tell me I had raccoon eyes?” she demanded, using her fingers to scrub at the black smudges beneath her eyes.

“Because I like my head where it is?” he suggested. “Didn’t seem like the right time to point out that you puked so hard your mascara started to run.”

She sighed and let her fingers drop to her lap. “Yeah, this ain’t gonna do it. Do we have tissues or anything?”

“There might be some napkins in the glove box.”

She rummaged around the overstuffed glove box until she came up with a single, crumpled napkin. “Are you done with that?” she asked, already reaching for Cade’s soda.

“Knock yourself out. It’s mostly melted ice now.” He watched, amused, as she dipped the edge of the napkin into the cup. “You know we’re like twenty feet from a bathroom, right?”

Rynn looked borderline scandalized. “I can’t go inside like this.”

Right. Of course. Cade shook his head. Women. “Give me that. You’re doing it all wrong,” he said after a couple of minutes, when she’d only managed to smear the makeup worse than it had been. He wet half the napkin liberally, ran it under her left eye until a few drops of water dripped down her pale cheek, then used the dry half of the napkin to remove both water and mascara.

Rynn went utterly still at his touch. She sat up straight in the seat, gaze fixed on some point beyond his shoulder. Her skin was cool beneath his hands. Cool and smooth and pale. She’d lost her Alabama tan months ago. He kept his touch light, one hand on her jaw to turn her face as he repeated the process with her other eye. She sucked in a breath when he leaned closer. And he wondered if maybe, just maybe, she wasn’t completely unaffected by him after all. If he kissed her, would she let him?

He dried her face, imagining he was drying her tears and finding the thought strangely appealing. His thumb traced the outline of her jaw, and she jolted. Her eyes flew to his, wide and fathomless. He could lose himself in those eyes. Her lips parted, and his gaze zeroed in on her mouth.

She bit her lip and turned her head to stare out the passenger side window. Cade watched her, wondering what he was even supposed to say to that, cursing himself for spooking her.

“Did you get it all?” she finally asked.

She checked her reflection in the visor again and nodded. “Like it never happened.” Her laugh sounded forced. “Where did you learn to do that? Did you have to wear makeup at the club? Eyeliner, goth guy stuff,” she added quickly at his look.

“No. It’s a trick I’ve seen my sister do a thousand times.” And strippers. Lots and lots of strippers, when the stage lighting had made their heavy makeup run between sets. Not that he would tell her that. There was a lot of shit he wouldn’t tell her. Too much. And suddenly, he felt like an idiot for thinking he had any right to kiss her a moment ago. 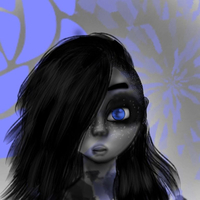 3 winners will receive an eBook of FIX YOU, International.