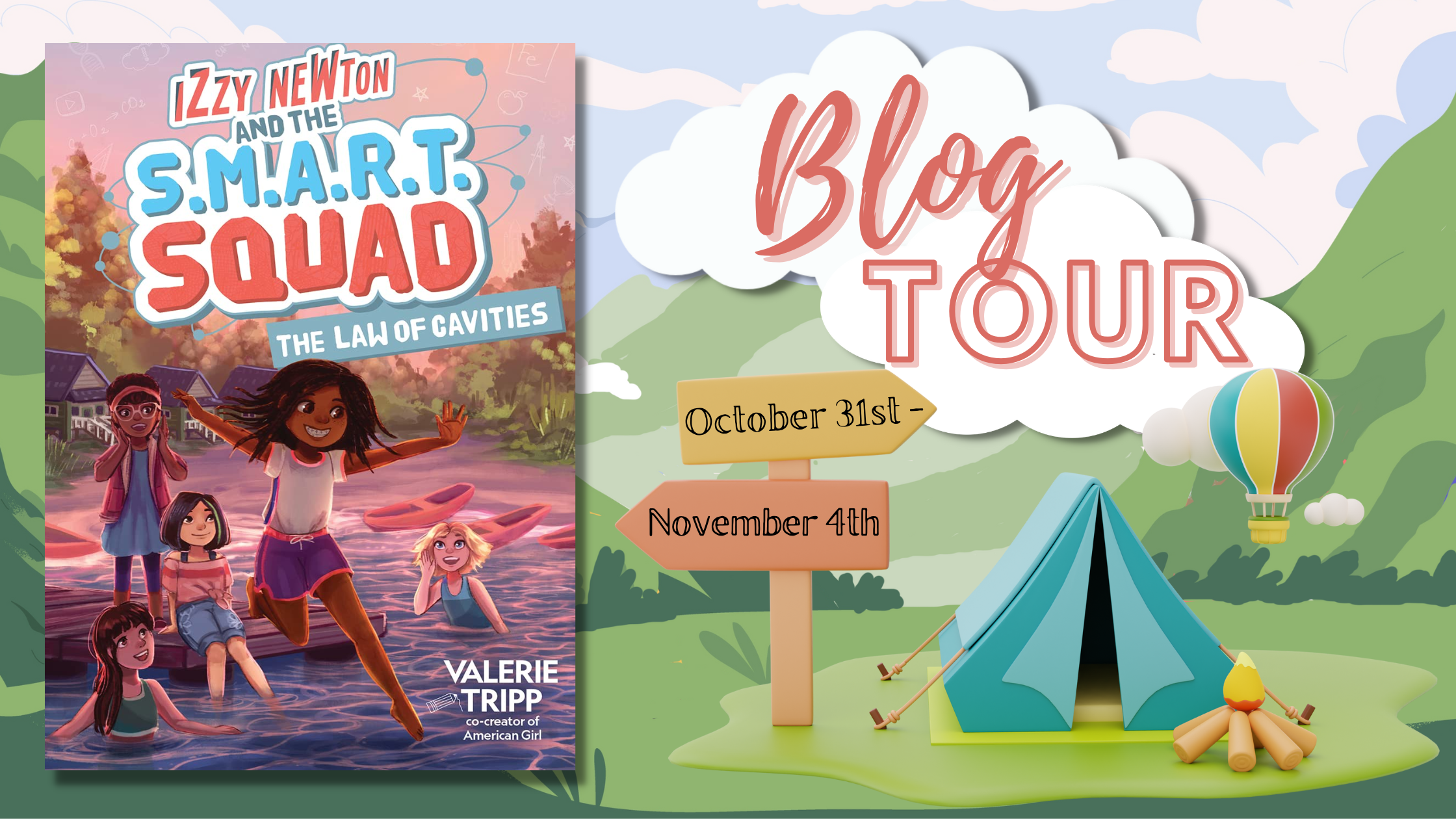 Welcome to the Izzy Newton and the S.M.A.R.T. Squad #3: The Law of Cavities Blog Tour!

Follow along as we celebrate the release of The Law of Cavities (October 11th) with behind-the-scenes looks from author Valerie Tripp, plus 5 chances to win all 3 books in the Izzy Newton series!

Why STEM?:
An overview of the genesis of the Izzy Newton and the S.M.A.R.T. Squad’s three-book series,
the characters, and a why a STEM series featuring girls is important
by Valerie Tripp

I’m tapping into girls’ fascination with science, technology, engineering, and math. The ideas spring from them; I’m just responding, celebrating, and organizing them! What an honor and delight to be with my readers as they explore their passion for science! The fun of it excited me, really. I love throwing five girls together, challenging them with a problem, and then watch out! Anything can happen. I knew the stories would be powered by girls’ energy, passion, purpose, and drive. And I KNOW these girls! They’re smart and funny and stubborn and kind. They challenge assumptions with a cheerful skepticism. They ask, “I wonder what will happen if I do this?” But I was also driven by a sense of urgency. I want the stories to focus on putting facts, science, evidence, and logic to work in the service of compassion. Could there be anything more important right now? In a way, the series is a thank you. It’s an acknowledgement of the debt of gratitude we owe to scientists, technicians, engineers, and mathematicians who heal us, solve mysteries daily, and keep us safe and connected (especially now.) Whether they’re delving into the interior mysteries of our own brains and bodies or sending us into space, what they do touches and enriches all of our lives. The most rewarding part about writing this story was drawing the metaphorical connection between the science and the group dynamic. The most challenging part was – as is ALWAYS the case for me—honing the story to its essence, paring it to its bones. I’m chatty, my manuscripts are rambling, and I always have more to say than I have room for!

Izzy and her friends are smart, creative, and kind. The girls use The Scientific Method to solve tangible, mechanical problems and mysteries. Their motivation is not only to ensure the physical comfort and safety of their school community, but also to protect the happiness of a friend, sibling, teacher, or school staffer. In The Law of Cavities, the S.M.A.R.T. Squaders put their knowledge, energy, and abilities to work to save their beloved Camp Rosalie Edge from destruction. Science is put to use for human happiness; it is science in the service of kindness. I’m hoping that readers will be intrigued AND engaged emotionally; they’ll root for the girls to triumph and have the satisfaction of solving the mystery, they’ll laugh at their jokes and pratfalls, AND their hearts will be invested in the outcome because it will affect a character they care about, one who’s a friend.

Unity of Imagery: Personalities
As stated above, ALL our girls are smart, creative, and kind. They’re also often funny! In addition, each character’s personality subtly reflects/illustrates/personifies her field of interest and alludes to the scientist she’s named after. (For example, Izzy plays the flute, as Isaac Newton did.)

Izzy, our physicist, is thoughtful, dedicated, shy but good at making things and people and ideas work/pull together, careful and conscientious, aware of strengths and stresses, the heart of her group of friends. She loves ice hockey and puns and hates speaking in front of groups of people. Maybe one of her friends jokes that Izzy reminds her of Newton’s First Law of Physics: she’s fully focused when at rest, and once set in motion, nothing can stop her!

Marie, our chemist, likes to “mix things up:” to cook, be creative and totally chic in her clothing, and to change her appearance. She’s mercurial, unpredictable, and wears neon and fluorescent colors. She has good chemistry with quirky people, but she does not suffer fools. Marie dislikes getting dirty and messy, but she’s almost an alchemist when it comes to mixing up a batch of fertilizer or smelly compost to rescue dying plants.

Charlie, our biologist, is physically gifted, an athlete, has great instincts and intuition and knowledge of medicine and human body systems, loves animals, is healthy, robust, a healer/doctor/ caretaker, hiker/camper; never uses leather, wool, or plastic. She’s natural, outdoorsy, organic, vegetarian, protective of the environment, is ever growing/flowering/flourishing. She’s a gardener, and super-ecological: rides her bike, practices yoga, and is a super fast runner.

Allie, our mathematician, adds it all up, sees patterns (and so remembers behaviors, too) likes codes, and designs, believes ‘the more, the merrier’ in terms of people and friends as well as accessories, hobbies, and projects. Allie gets so carried away with enthusiasm that she doesn’t stop to think before she thinks or acts sometimes. As many mathematicians do, she likes the precision of basketball, music, and poetry, such as haiku.

Gina, our inventor/engineer, is constructive, imaginative, inventive, deft, flexible (literally and figuratively) and creative, likes to build and sew and find practical, tangible solutions. She’s a hipster, only buys from second-hand clothes shops, and is very independent. Gina is sort of a pack rat so her room, locker, and backpack are messy but that’s because Gina trusts the creative potential of chaos.

By the way, you can see that without shouting it out, the girls’ interests and actions show the possible careers connected to each field of science. For example, Charlie’s interest in biology could lead her to choose to be a doctor.

How are the scientific mysteries in the books developed?
The mysteries come from real life. The mystery in the first book is one that happened in my house when I was growing up. The mystery in the second book was inspired by a newspaper article I read about middle-schoolers in Virginia identifying and fixing a mold problem in their school. This book, The Law of Cavities was inspired by an experience my family and I had when we were stranded by high tide. I always read about and research the science mystery as much as I possibly can. I talk to experts, and then I hand it over to the S.M.A.R.T. Squad.

How did the series begin?
The title of this answer should be: “Say Yes.” I met Rebecca Baines when, as a favor to my friend Carolyn Johnson, I said yes to being an emergency last-minute substitute speaker at a meeting of librarians. Later, I said yes when Becky invited me to lunch. Only then did I learn that she was the Executive Editor of National Geographic Kids Books and she and her Nat Geo Kids team had developed the idea of a STEM series: fiction books about five brainy girls who used their science ability to solve mysteries besetting their middle school. The book titles, which are plays on words, and the characters’ names were already in place. When Becky asked if I’d be interested in writing the books, I said YES! At that first lunch, I immediately suggested three ideas:

A message to readers from author Valerie Tripp:
I hope my readers will come away with this message: You are a scientist. You observe, test, evaluate, and draw conclusions constantly. STEM—Science, Technology, Engineering, and Math—is not restricted to labs or science fair booths or classrooms. You’re doing STEM stuff everywhere, all the time, when you cook, run, feed you pet, quench your thirst, dive into a wave, wash your hands, learn to do a cartwheel, spend time on your laptop, look up at the stars, cut an apple into parts and divvy up the shares. Know this, embrace this, celebrate this—and take responsibility for both exploring AND protecting this extraordinary, exciting, surprising universe. Get out there! Be active, curious, and focused. Take yourself seriously. Your actions matter because they will shape the world we all live in.  Be mindful, pay attention, learn, and live fully with courage and zest.  And don’t be afraid to fail. Chaos, mess, and failure are essential parts of all creative endeavors like science. Don’t worry. Things heal. Mistakes are forgiven. You have plenty of time to tidy up. 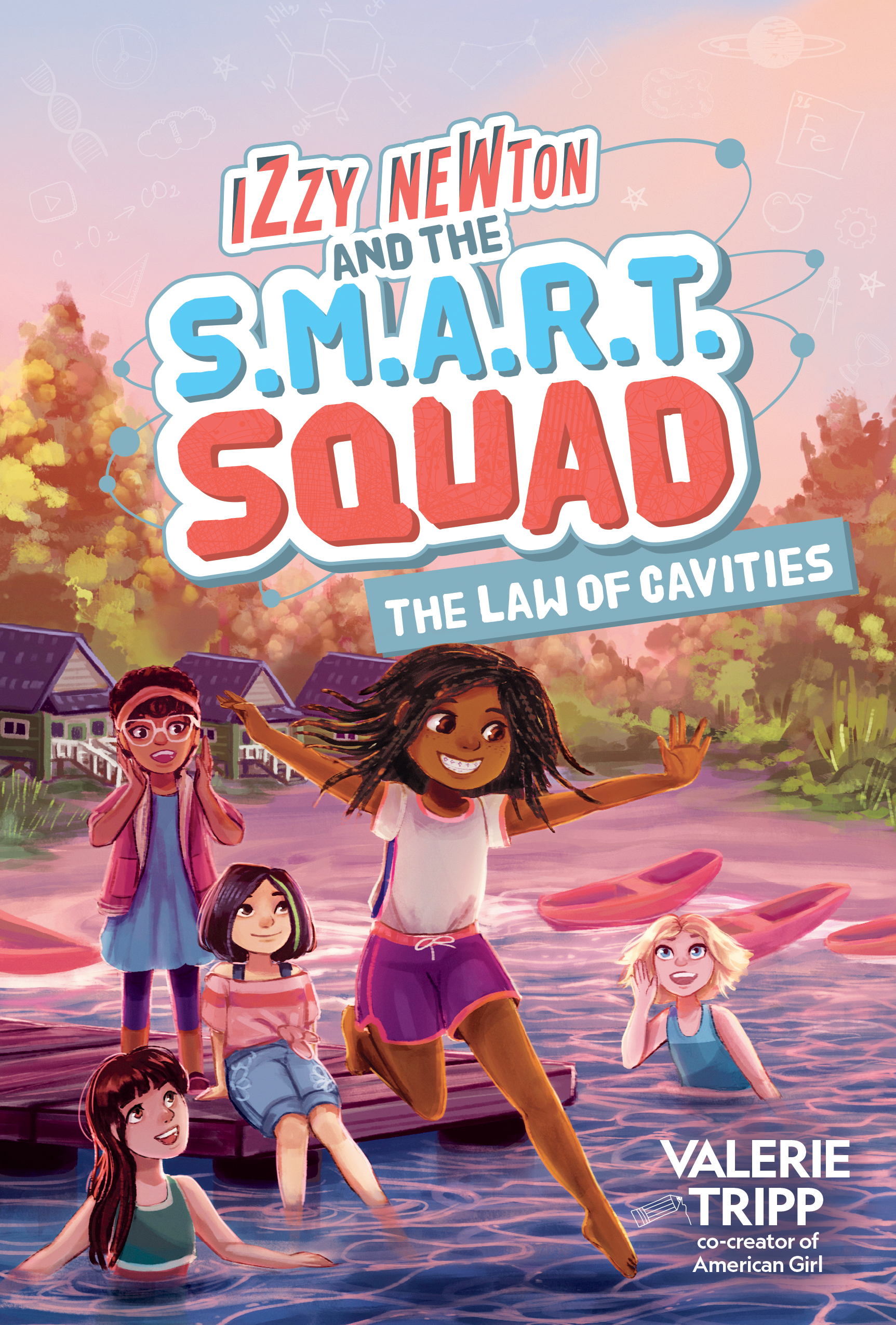 Meet the characters, watch the book trailer and check out the Educator and Reader’s Guides on the series website here!

The S.M.A.R.T. Squad is back to tackle more middle school mayhem with science, technology, engineering, math, and friendship!

Now that Izzy’s finally found her voice in public speaking class and become an ice hockey star, she’s determined to conquer her “dizzy-Izzy-ness” in new situations―including caring for her brand-new braces on an outdoor education overnight and her friends’ good-natured teasing about her friend Trevor. But the forecast for fun turns cloudy when the girls discover their cabin chaperone is none other than Izzy’s tough public-speaking teacher, Ms. Martinez, and their junior counselor is eighth grade mean girl, Maddie Sharpe.

When an innocent exchange of harmless pranks with Maddie takes a turn for the worse, the Squad turns to science to prove their innocence. That’s nothing, though, compared with the terrifying swamp monster haunting their campsite, a catastrophe befalling Ms. Martinez, and a mysterious disaster threatening the future of camp itself.

With their very survival on the line, will science be enough to save the day?

“It’s one thing to have children’s books about scientists or podcasts or stories about strong women in STEM, but it’s another world entirely when your children get to feel represented by the characters they’re reading about. The characters in the Izzy Newton and the S.M.A.R.T. Squad series are diverse, smart, and sure of themselves the way all middle school girls are—through their dreams and newly acquired skills they’re still getting used to.”
― Romper 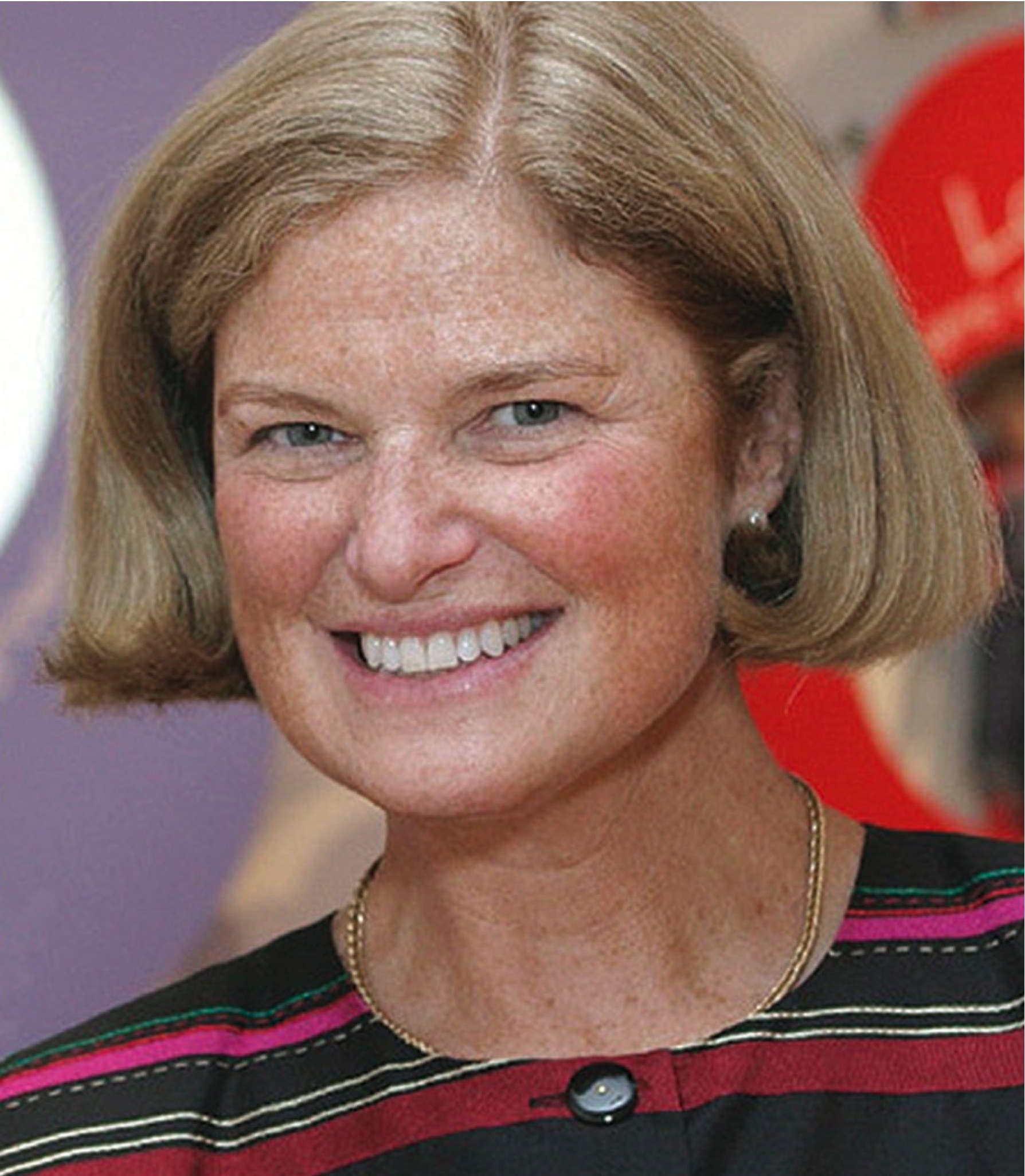 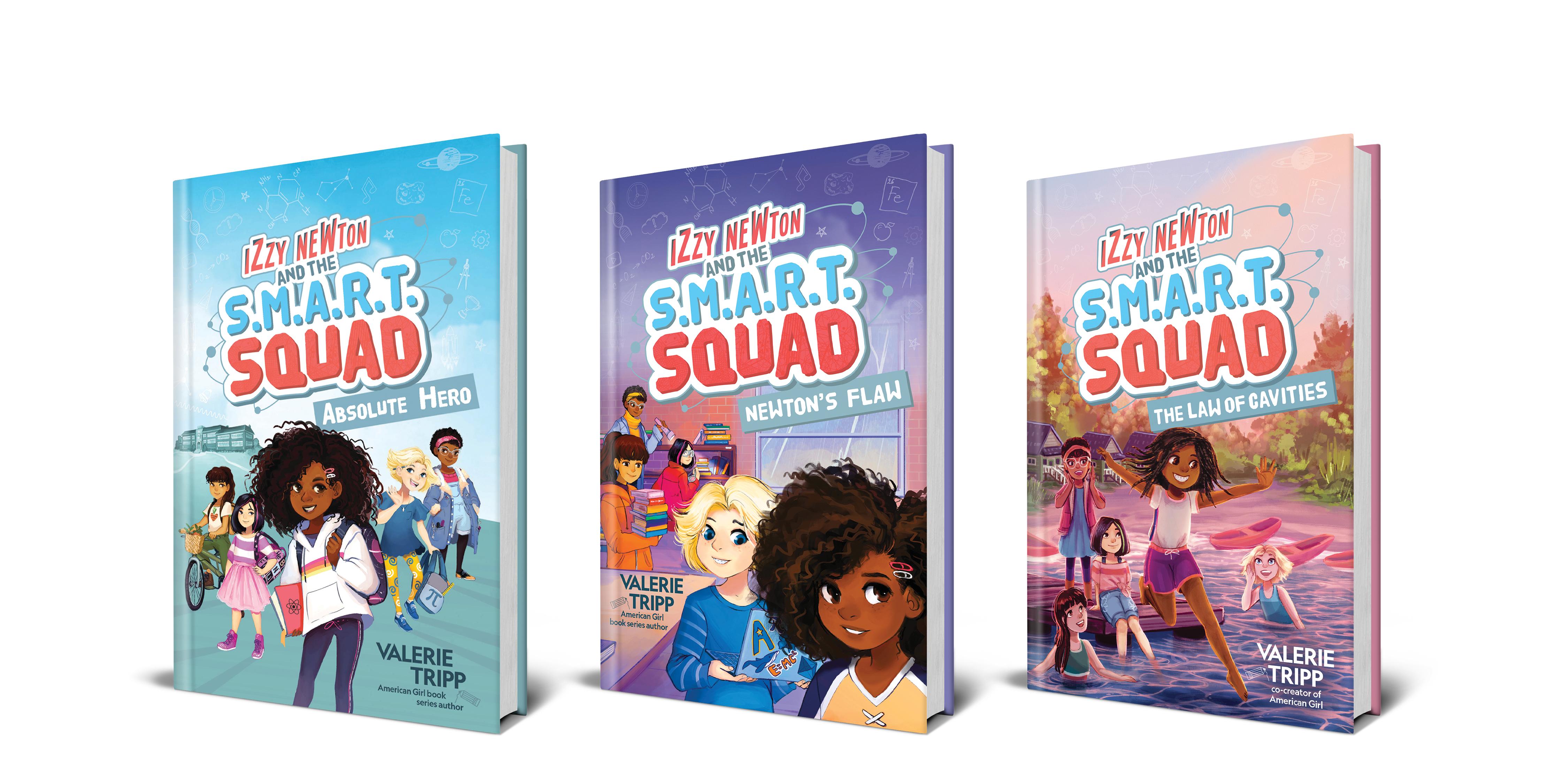