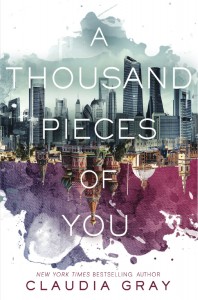 Cloud Atlas meets Orphan Black in this epic, dimension-bending trilogy by New York Times bestselling author Claudia Gray about a girl who must chase her father's killer through multiple dimensions. A Thousand Pieces of You explores an amazingly intricate multiverse where fate is unavoidable, the truth elusive, and love the greatest mystery of all. Marguerite Caine's physicist parents are known for their groundbreaking achievements. Their most astonishing invention, called the Firebird, allows users to jump into multiple universes—and promises to revolutionize science forever. But then Marguerite's father is murdered, and the killer—her parents' handsome, enigmatic assistant, Paul— escapes into another dimension before the law can touch him. Marguerite refuses to let the man who destroyed her family go free. So she races after Paul through different universes, always leaping into another version of herself. But she also meets alternate versions of the people she knows—including Paul, whose life entangles with hers in increasingly familiar ways. Before long she begins to question Paul's guilt—as well as her own heart. And soon she discovers the truth behind her father's death is far more sinister than she expected.

SO MANY LAYERS OF AWESOME

Marguerita (aka M) has a loving if somewhat strange home life.  Her mother is quite possibly the smartest human since Einstein and her father is just as gifted. She didn’t inherit the science gene but has a wonderful grasp on the arts.  Her mother has always believed that there is more than one dimension to life and that travel between the planes and time is possible.  Inventing a device that allows the movement between these areas of space and time, her parents are in the final stages of testing.  Living in such a bohemian existence has allowed M to be as creative as she wants to be.  Her older sister has left the house for her own career in science and as M decides on her future after high school, her world is turned upside down when she comes home to find her father dead.  Two of her mother’s students are both on hand and when one, Paul, is the main suspect, Theo tries to help M get to the bottom of her father’s death.

So, this sets up a perfect love triangle between M with Theo and Paul, as M races through time and dimension to find her father’s killer.  It could be Paul, as he was the one suspected by poilice, but as she moves through each area of her own life, she now suspects that Paul may not be the criminal.   Everything in this world is so seemlessly built upon their current lives, that each little clue adds up to exactly who these three characters are.  OK, that didn’t come out quite how I wanted it to, but each dimension shows the characters and all of their essence to be both good and bad.  You travel from current time to future London and then prerevolutionary Russia. All possiblities are someplace that you want to exame more closely.  I was so taken by the wonderful details that I didn’t want to leave any of the areas.

There is also the element of a criminal thriller and that M must find her father’s murderer, no matter what the cost since the man funding her mother’s experiments in dimensional travel seems to be somewhat evil.  This start of the series doesn’t get into too much detail about him, but you really want to follow that trail to the end.  The college boys in this story are also drawn in shades of gray (not that knd), and the each seem to point their finger at the other as the evil element.  M is also very interesting and since she swears she has no scientiific ability, you can see that her parents skills at thinking things through shine in her own mind.  One point really made me laugh with her since she is not a vain person.  As she is dressed as a Romanov Princess, she thinks that she had her cell phone since those selfies would be all she could ever dream of as perfect.  I could go into so much detail, but I really don’t want to ruin it for you.  There is so much here to wonder about and now I can’t wait until the next installment. (1)  A THOUSAND PIECES OF YOU Prize Pack consisting of a scarf with a quote from the book, a scented candle from one of the mutliverses, and a signed book. International

$50 Giveaway Interview REWIND TO YOU by LAURA JOHNSTON @lauralojohnston