AWARDS
2018 American Fiction Awards Winner for Pre-Teen Fiction (Ages 10-12)
2018 Killer Nashville Silver Falchion Finalist for Best Juvenile Fiction
2018 International Book Awards Finalist for Children’s Fiction
2018 Hollywood Book Festival Honorable Mention for Children’s FictionPraise for 7th GRADE REVOLUTION“7th Grade Revolution is a thrilling and engrossing ride through past and present based on real events in North Carolina. Though technically a middle grade book, I feel readers of all ages will enjoy this novel. Trust me, you won’t want to put it down.” ―Tracy Riva, Midwest Book Review..”. a stunning new Middle Grade novel that is part historical fiction, part action adventure mystery, and all around fun. Featuring a cast of wacky, interesting kids I was hooked on page one and enjoyed every twist and turn of the creative plot. Gardner is a writer to watch.” ―Dan Elish, Award-Winning Author of BORN TOO SHORT: The Confessions of an Eighth-Grade Basket Case

..”. an exciting, smartly written book filled with adventure, intrigue, and history in a modern school setting. Luke Spooner’s accompanying art is simply spot on. I can’t wait for my daughter to read this, and there’s no higher compliment than that.” ―Mercedes M. Yardley, Bram Stoker Award-Winning Author of Little Dead Red

So, I arrived home earlier today to find your book on my front porch and I have just come up for air, realizing that I haven’t even eaten since I picked it up. (It’s 11:00) I don’t even know where to begin. Should I start with the dedication that brought me to tears? The first time I saw my name as the teacher and I gasped? (I really had forgotten that you had said you would use my name!) The fact that the beginning of the book is so very reminiscent of the real thing? The illustration toward the end when I saw myself? All of those things were beyond my expectations, but what I really want to say is that the book held me captive from beginning to end. You captured the middle school mind perfectly, showing their insecurities as well as the amazing strength that is just below the surface. Bravo! It is a wonderful book and I can see it being used during a study of government as a class read. The illustrator is also superb. I could go on and on. (I also am really amazed at how you captured me as a teacher … how did you do that?) So thank you, thank you, thank you! I loved every part of this book and I am so very proud, as I said earlier, to have had any part in it. ―Karen Rectanus, Exploris Middle School 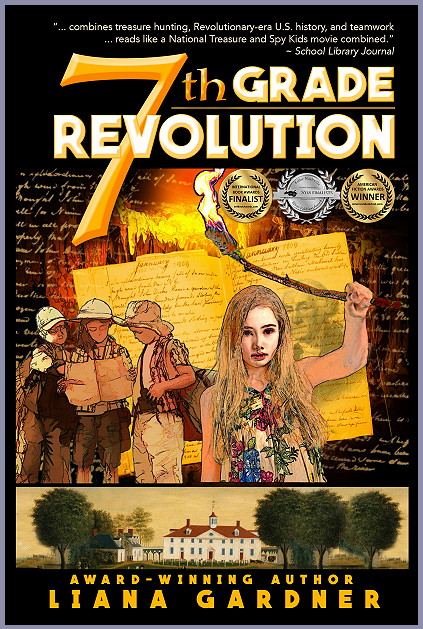 Dennis Alexander: Washington Academy Middle School promises to be another in the long line of boring schools he has been expelled from.

Rhonda Snodgrass: Although trained from childhood in survival tactics, she tries to stay off the radar of the “cool” kids who think she’s weird.


7th grade turns out to be anything but normal when teachers announce the students’ bloodless revolution succeeded and they are now in charge. After conducting a secret-ballot vote on policy, the 7th graders emerge to find the school evacuated and the FBI lurking outside with the task of unearthing a treasure of national importance.

The students’ mission is clear—discover the treasure before the FBI locks down the building. Dennis and Rhonda lead the revolt and must work together to follow century-old clues left by a crazy Revolutionary War buff.

To stay one step ahead of the FBI, they must delve into history and amass an arsenal to defend their school … because this is WAR

In the darkness ahead, strange noises, squeaks like fingers sliding on a steel guitar—times a thousand—cut through a fluttery sound. Beating wings.

Crud. Rhonda threw her arms over her head and ducked. “Bats!”

The shrillness ricocheted off the walls and assaulted Rhonda’s ears. “Get down.” Didn’t they know bats moving in a group couldn’t use their natural navigation? “And turn off the flashlight.

Curtis tossed the torch down and hunched in front of her. As the sound grew louder, he turned and put his arms around her.

Omigosh, omigosh, omigosh. They were under attack by a bat colony and the only thing that mattered was Curtis Vanhouten had his arms around her. Well, not under attack, but close enough. The noise swelled as the bats flew overhead, the vibrations from the thrusting wings bounced off their hunched bodies.

When they had passed, Selena whimpered. “Can we get up yet?”

Rhonda peeked into the surrounding darkness. “I don’t know.” The sound decreased as the bats flew farther away. “We came from that direction, unless they go out the trap door, how will they get out?”

Goodness. What if they went flying through the school? Would the FBI break their pact to stay out if they saw a bat cloud flying past the windows?

The peeping sounds grew louder. “They’re coming back. Stay down.” Were they going to wind up crouched on the tunnel floor in waning light from the torch while being dive-bombed by bats all day? The cloud flew overhead and back through the tunnel. The crew waited in case they came back.

Rhonda uncovered her head and strained to hear any noise through the silence. Nothing. “I think they’re gone.”

Curtis let his arms fall to his sides. Then he reached for the torch and held it up again.

She stood. In the dim light she saw Dennis had covered Maddie in the same way Curtis had shielded her. Well, it was nice while it lasted, whatever the reason.

Selena clung to James’s arm. “We’re going to follow the bats?” Her voice rose to a squeak.

Rhonda put one hand on her hip. “You can always go back to the Dungeon.”

“No.” Selena straightened. “I’m going with you.”

You can purchase 7th Grade Revolution at the following Retailers: 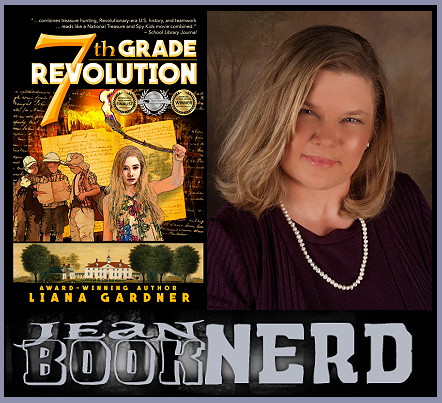 Liana Gardner is the award-winning author of 7th Grade Revolution and the Misfit McCabeseries. Daughter of a rocket scientist and an artist, Liana combines the traits of both into a quirky yet pragmatic writer and in everything sees the story lurking beneath the surface. Engaged in a battle against leukemia and lymphoma, Liana spends much of her time at home, but allows her imagination to take her wherever she wants to go.

She fostered her love of writing after reading Louisa May Alcott’s Little Women and discovering she had a great deal in common with the character Jo. The making up of stories, dramatic feelings, and a quick temper were enough for her to know she and Jo would have been kindred spirits.

*JBN is not responsible for Lost or Damaged Books in your Nerdy Mail Box*
Giveaway is open to International. | Must be 13+ to Enter
– Winner will receive an Award-winning 2017 MG, 7th Grade Revolution Swag (Mugs, Playing Cards, T-Shirts) by Liana Gardner.
– Winner will receive a $25 Dollar PayPal/Amazon Gift Card 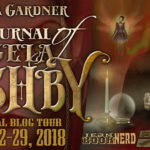