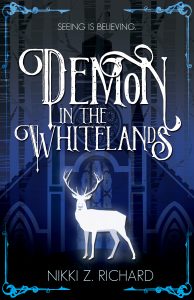 Demon in the Whitelands by Nikki Richard

Sixteen-year-old Samuel, son of a devout cleric, has endured shame and prejudice his entire life. Though he is destined to follow in his father’s footsteps, he longs for an ordinary life in the whitelands away from talk of demons and holy roots.

When the mayor claims to have captured a mute demon-girl, Samuel is forced to become her caretaker. But as Samuel gets to know the prisoner, he finds her not to be very demonlike. Instead, she is intelligent, meek, and an exceptional artist. Despite her seeming goodness, some more concerning things cannot be ignored. Samuel is hard-pressed to reconcile her uncanny strength and speed, one missing arm, ambiguous gender, and the mysterious scars covering most of her body.

Samuel forms a deep attachment to the girl with predator eyes and violent outbursts, against his father’s advice. As their friendship threatens to become something more, Samuel discovers the mayor’s dark intentions. Now, he must decide whether to risk his own execution by setting her free, or watch as the girl is used as a pawn in a dangerous game of oppression, fear, and murder. 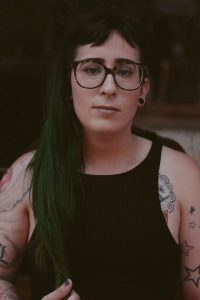 Nikki Richard is a sensitive queer writer with moods and coping mechanisms. An MFA graduate from the University of Baltimore, she lives in the city with her hot wife, amazing daughter, and fluffy cat.

Why You’ll Love this book

If you’re a fan of dystopian worlds, introspective queer characters, and bursts of macabre, Demon in the Whitelands might be up your alley. The book centers on sixteen-year-old Samuel, the bastard son of a cleric, and his desire to leave the footsteps of his father and live a normal life in the desolated Whitelands. When the mayor of a logging town claims to have captured a demon girl, Samuel is appointed to become the caretaker. This professed “demon girl” with predator eyes is genderless, missing one arm and covered in scars, and possesses uncanny strength and speed. As Samuel gets closer to the humanoid being, he learns their name, Zei. Capable of great intelligence, creativity, and sensitivity, Zei forms an attachment to Samuel. With their connection threatened by outside forces that would have Zei used as a tool of war, they find themselves relying on each other in order to survive in a world marked by oppression, fear, and death.

This book is packed full of action, drama, and mystery, and is unique in that it’s a YA dystopian novel with queer characters at the center of it. If any of that tickles your fancy, then I think you’re in good hands.