A DARKENING OF DRAGONS Blog Tour

I am thrilled to be hosting a spot on the A DARKENING OF DRAGONS by S.A. Patrick Blog Tour hosted by Rockstar Book Tours. Check out my post and make sure to enter the giveaway! 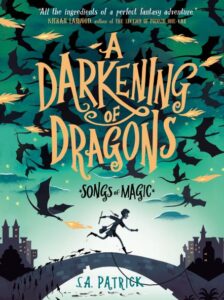 Three accidental heroes encounter one legendary villain in an epic dragon-filled adventure just right for young fans of Terry Pratchett, J.R.R. Tolkien, and How to Train Your Dragon!

13-year old piper Patch Brightwater is a boy in disgrace. Thrown in jail for playing a forbidden spell, he is no one’s idea of a hero. But then he discovers a deadly truth – the evil Piper of Hamelyn is on the loose.

With the help of Wren, a girl cursed to live as a rat, and Barver, a fire-breathing dracogriff, Patch must stop the Piper from sparking the biggest battle of them all.

S.A. Patrick’s debut children’s novel is a vivid retelling of one of the darkest legends of all time – the Piper of Hamelyn. Combining fairy tale lore with the very best of modern storytelling and empowerment, A Darkening of Dragons takes fantasy fans on a journey filled with adventure, magic, and the delight of finding friends in unexpected places. Perfect for fans of The Hobbit, Terry Pratchett’s Tiffany Aching books, and How to Train Your Dragon.

I needed a book like this.  It is a fun and twisty tale about a girl who is under a curse and forced to live as a rat, a boy who is in jail for casting an illegal spell, and the evil Pied Piper of Hamelyn.  Even better, there are dragons – well almost, I hope they appear further than the brief mention in this starter book!  The dragon in question is actually quite the character – he talks like a human and acts like one too.  In reality, he is a dracogriff – half-dragon, half griffon. This is a wonderful start to a new series.

Patch is an apprentice piper learning the trade to lure away the rats from the city but he uses a song that not only leads the rats to their death but is now starting to magically affect humans – so off to jail he goes.   While in jail, he meets the evil Piper who not only leads baby dragons to their death but human children as well.  When he meets Wren, he tries to help reverse the curse that forces her into the body of a rat. Their friendship is so sweet and Patch really tries to help his friends no matter what.

This is a very fun and fast-paced read that is truly a joy.  I finished this one rather quickly and can’t wait for another installment. 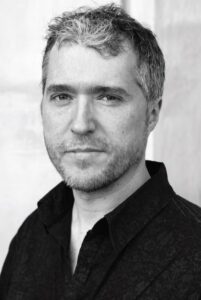 A. Patrick was born in Belfast. When he was a child, he wanted to write video games, become an author, and have magical powers. The first two came true. If he ever does get magical powers, he hopes people like dragons and griffins because there’ll suddenly be a lot of them around. He lives in England.

1 winner will receive a finished copy of A DARKENING OF DRAGONS, US Only.