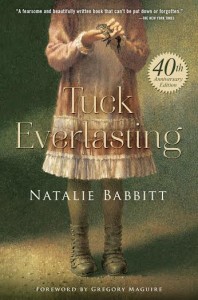 Blessed with—or doomed to—eternal life after drinking from a magic spring, the Tuck family wanders about trying to live as inconspicuously and comfortably as they can. When ten-year-old Winnie Foster stumbles on their secret, the Tucks take her home and explain why living forever at one age is less of a blessing than it might seem. Complications arise when Winnie is followed by a stranger who wants to market the spring water for a fortune. A brand-new introduction from Gregory Maguire, the author of Wicked, and additional bonus materials make this special edition of Natalie Babbitt's Tuck Everlasting a must-have for lovers of the book and a great way to introduce a new generation to a classic.

2015 marks the 40th anniversary of Natalie Babbitt’s celebrated, ground-breaking title Tuck Everlasting (Anniversary edition on sale January 20). In celebration of the anniversary, Macmillan Children’s Publishing Group will publish a special anniversary edition featuring an introduction from Wicked author Gregory Maguire. Natalie will be in conversation with Gregory Maguire at Symphony Space in New York City on Sunday, January 25 at 1:00 PM. Alexis Bledel, star of the 2002 movie adaptation, will read
from the book.

Tuck Everlasting asks readers “What if you could live forever?” Doomed to, or blessed with, eternal life after drinking from a magic spring, the Tuck family wanders about trying to live as inconspicuously and comfortably as they can. When ten-year-old Winnie Foster stumbles on their secret, the Tucks take her home and explain why living forever at one age is less of a blessing than it might seem. Then complications arise when Winnie is followed by a stranger who wants to market the spring water for a fortune.
Upon the book’s publication in 1975, Natalie was greeted with concern from parents and educators who were stunned to read
a book about death written for children. She is an author who challenges her readers and thinks the best questions are the
ones without answers. This 40th anniversary will introduce a whole new generation to this timeless classic. The book has sold over 3.5 million copies in the US alone, and has never been out of print since publication.

NATALIE BABBITT is the award-winning author of Tuck Everlasting, The Eyes of the Amaryllis, Knee-Knock Rise, and many
other brilliantly original books for young people. She began her career in 1966 as the illustrator of The Forty-Ninth Magician, a
collaboration with her husband. When her husband became a college president and no longer had time to collaborate, Babbitt
tried her hand at writing. Her first novel, The Search for Delicious, established her gift for writing magical tales with profound
meaning. Knee-Knock Rise earned her a Newbery Honor, and in 2002, Tuck Everlasting was adapted into a major motion
picture. Natalie Babbitt lives in Connecticut, and is a grandmother of three.

“What if you could live forever?”

As part of this blog tour, we were asked this question.  In the story,  Winnie meets Mae, Angus, Miles and Jesse Tuck, who are in the woods near her house.  Jesse, the youngest Tuck admits that he is one hundred and four but actually hasn’t aged since he was seventeen.  His father has tried to commit suicide several times but was always uninjured no matter what he tried.  He was just tired of living.  Jesse tries to convince Winnie to drink the spring water in her woods when she is seventeen so they can travel the world together.  She has the water, but decides in the end not to partake.

This question gave me pause.  Would I want to live forever if I could recover from any illness or injury?  Would I want to be stuck at my age forever?  On the one hand, it would be awesome to read every book I wanted to, knowing that I wouldn’t run out of time and could visit all of the places I wanted to go.  But I kept thinking, who would I share it with?  All of my relatives would be dead,  my friends would be dead and gone.  How would I survive a lonely existence, only able to live in a place for 20 years or so before having to move on.  It would be hard in this day and age to survive since everything you do it recorded somehow.

For the Tucks, it was an extreme hardship and there was no way to end it and as Mr. Tuck said, it just wasn’t natural.  It was a relief that the spring had been sealed over and that no one would ever be left the choice of living forever.  I don’t think I would want to go on more than my intended years.  I think the years that I have are plenty and try to take advantage of every day I have left.  Winnie made the right choice by not drinking from the spring.

I am giving away my copy (this is not the 40th anniversery edition) to any resident of the US.

Just click on the link and leave a simple yes or no comment to the question, would you want to live forever?
a Rafflecopter giveaway