Nicolette’s awful stepsisters call her “Mechanica” to demean her, but the nickname fits: she learned to be an inventor at her mother’s knee. Her mom is gone now, though, and the Steps have turned her into a servant in her own home.
But on her sixteenth birthday, Nicolette discovers a secret workshop in the cellar and begins to dare to imagine a new life for herself. Could the mysterious books and tools hidden there—and the mechanical menagerie, led by a tiny metal horse named Jules—be the key to escaping her dreary existence? With a technological exposition and royal ball on the horizon, the timing might just be perfect for Nicolette to earn her freedom at last.
Gorgeous prose and themes of social justice and family shine in this richly imagined Cinderella retelling about an indomitable inventor who finds her prince . . . but realizes she doesn’t want a fairy tale happy ending after all.

Nicolette has been homeschooled by her mother, who is an amazing engineer and builds mechanical insects and animals that her father sells around  the world.  Her mother’s secret ingredient to make these critters almost real is a bit of fairy dust.  Nick, as she is known to her family, is taken care of by the housekeeper who is part fairy and he cares for her just like her parents.  When the queen dies of a fairy-related disease, the border to that county is cut off, the Heir is now in seclusion and anything fairy related is criminalized.   The demand for her mother’s work shrinks and her mother dies from the same fairy disease as the queen.  Her father remarried and within short order, he dies as well, leaving Nick with her stepmother and stepsisters.

The story follows the Cinderella fairy tale to a certain extent but then quickly diverges from the orignal.  This Cinder doesn’t have a fairy godmother, she makes everything happen on her own with a bit of fairy magic that she controls.  The stepsisters are really the evil ones of this story, always demanding more of Nick.  She makes her own gown and slippers, as well as her carriage in order to impress the upper class to win consignments for her own work and buy her freedom.  She also has a wonderful side kick of a small horse named Jules that her mother has left for her.  Jules brings a bit of humor and relief to the story.

I am truly addicted to fairy tale retellings and this one was a quick and easy read for me.  I loved the fact that Nick doesn’t rely on a fairy godmother to make magic and did it all herself.  OK, she had a bit of fairy magic but didn’t rely on it.  The magic frightened her and she didn’t like it. Of course, she meets the prince at the dance but she was savvy enough to know that the life of a princess would not be easy.  I thought the ending was truly a girl-power type ending that was more realistic than any fairy tale could be.  Nick stole my heart with her wit and actions.  Her perseverance is something that should inspire any teen and show that fairy tale endings sometimes are being at peace with yourself.  Parents:  There are a few kisses, discussions of social class, racism and some implied violence. Hi! I’m Betsy Cornwell, an American writer and teacher living in a stove-heated cottage in west Ireland, together with my horse trainer spouse, a small herd of dairy goats, and an increasing number of other animals. I write fiction and nonfiction and blog about Irish folklore, travel, wild food, goats (of course!), homesteading, and growing up.

Find Betsy on the web: 1 winner will receive a finished copy of MECHANICA and a beautiful watch necklace from this etsy shop! US Only.

2 winners will receive a finished copy of MECHANICA. US Only. 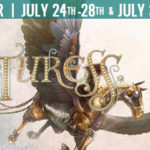