I am thrilled to be hosting a spot on the DIG TWO GRAVES by Gretchen McNeil Blog Tour hosted by Rockstar Book Tours. Check out my post and make sure to enter the giveaway! 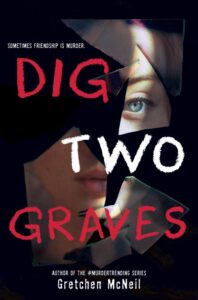 One of Us is Lying meets Hitchcock in this novel from celebrated author of the #MurderTrending series, Gretchen McNeil.

Seventeen-year-old film noir fan Neve Lanier is a girl who just wants to be seen, but doesn’t really fit in anywhere. When Neve is betrayed by her best friend, Yasmin, at the end of the school year, she heads off to a girl’s empowerment camp feeling like no one will ever love her again. So when she grabs the attention of the beautiful, charismatic Diane, she falls right under her spell, and may accidentally promise to murder Diane’s predatory step-brother, Javier, in exchange for Diane murdering Yasmin. But that was just a joke…right?

Wrong. When Yasmin turns up dead, Diane comes calling, attempting to blackmail Neve into murdering Javier. Stalling for time, Neve pretends to go along with Diane’s plan until she can find a way out that doesn’t involve homicide. But as she gets to know Javier – and falls for him – she realizes that everything Diane told her is a lie. Even worse, she discovers that Yasmin probably wasn’t Diane’s first victim. And unless Neve can stop her, she won’t be the last.

In this twisted game of cat and mouse, the reader never quite knows who’s telling the truth, who’s playing games, and who is going to end up dead.

When Neve is set to attend GLAM (Girls Leadership and Mentorship), a camp with a theatrical flare like her mother in order to get funding from her grandmother to attend college, she finds that she actually enjoys the drama involved.  Well, that is until she gets accused of murder.  She falls fast for Diane’s tales and ends up making a pact that might just include murdering her stepbrother in exchange for the murder of her tormentor, Yasmin,  But things change when Yasmin actually ends up dead and she gets to know Javier, Diane’s stepbrother.  This is a wonderful read for fans of McNeil’s noir.  This one is fast-paced and fun to read.

I love McNeil’s stories and this one just seemed a bit off from her normal style.  Yes, there are the twists and turns that I love but this one just seemed a tiny bit off.  I did like Neve since she overcomes the bullying of Yasmin, but it was still at a cost.  Diane is just over the top and reminds me of an actress that just isn’t that good. There are Hitchcock quotes throughout the book as well which help punctuate the drama but go read TEN or POSSESS for a better feel for this author.  I can see this developed into a TV drama though – it has all the right things to be entertaining. 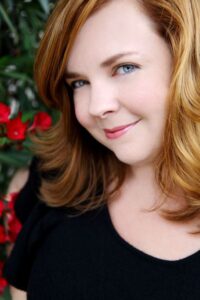 Gretchen McNeil is the author of #MurderTrending, #MurderFunding, #NoEscape, I’m Not Your Manic Pixie Dream Girl, Possess, 3:59, Relic, and Ten which was adapted as the Lifetime original movie Ten: Murder Island in 2017, as well as Get Even and Get Dirty, adapted as the series “Get Even” which is currently streaming worldwide on BBC iPlayer and Netflix.  You can find her online at www.GretchenMcNeil.com, on Instagram @Gretchen_McNeil, and on Twitter @GretchenMcNeil.

1 winner will receive a finished copy of DIG TWO GRAVES, US Only.