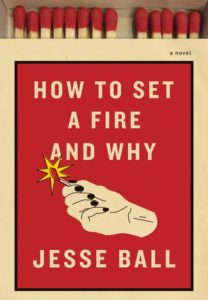 The highly acclaimed author of A Cure for Suicide now gives us a singular, blistering novel about a teenage girl who has lost everything—and will burn anything.
Lucia's father is dead; her mother is in a mental institute; she's living in a garage-turned-bedroom with her aunt. And now she's been kicked out of school—again. Making her way through the world with only a book, a zippo lighter, a pocket full of stolen licorice, a biting wit, and striking intelligence she tries to hide, she spends her days riding the bus to visit her mother and following the only rule that makes any sense to her: Don't do things you aren't proud of. But when she discovers that her new school has a secret Arson Club, she's willing to do anything to be a part of it, and her life is suddenly lit up. And as her fascination with the Arson Club grows, her story becomes one of misguided friendship and, ultimately, destruction. This is a story for those that enjoy a bit of anarchy in their reading.  Lucia Stanton lives with her elderly aunt with limited means since her father died and her mother is now in a mental institution.  This has been her reality since she was small. Now in high school, she has been kicked out of one and now entering into a new situation.  With anger issues and feelings of loss, she thinks she can actually try to make friends.  The only remaining item from her father is an old Zippo lighter that she carries with her everywhere, much like a security blanket.

When Lucia is invited to the Sonar Club (ARSON, people!) and thus begins a new life.  The club has a manifesto that she thinks needs improvement, so she is off to write a new one.  She seems to take two steps forward before society moves her back three.  It took me a bit of time to really get into the story but towards the end I was in tears at just how unfair life was to this girl and how she tried so hard but just couldn’t get a break.  Fans of Chuck Palahianuk will truly love this off centered story. Parents:  this is best for older teens since there is language and violence.

**Giveaway Ends 7.21.16 and open to all who can legally enter.
US only – must be over 18 or have your parents permission to enter.
An email will be sent and you have 48 hours to reply or a new winner will be chosen.
Winner will be announced within 48 hours at the end of the giveaway.
Giveaway is organized by Bookhounds and sponsored by the publisher~
It has no affiliation with Facebook, Twitter or any other entity.
Void where prohibited.**
Not Responsible for lost, stolen or misdirected prizes.