Valkyries have one great responsibility: to return immortals to the afterlife by slaying them. As a Valkyrie, Malin has always known that the balance of the world rests on her ability to carry out orders. But when Malin discovers that her mother spared the life of an immortal who was destined to die, her world is thrown into chaos.

Malin not only wrestles with the knowledge that her mother might not be who she thought—she’s also thrust into the path of a gorgeous blue eyed guy named Asher who needs her help slaying the rogue immortal who destroyed his family. The balance of the world is at stake. And, as Asher competes with Malin’s ex for her love and loyalty, so is her heart.

Wow — This new story by Amanda Hocking is an interesting combination of Science Fiction, Fantasy, and Mythology.  Malin is attending the Ravenwood Academy in a dystopian United States where she is training to be a Valkyrie like her mother.  All she wants in life is to slay creatures as ordered by the gods.  For all of Malin’s strengths, she is most stubborn and won’t be a full-fledged Valkyrie unless she graduates and her grades are not what they should be.  Her ex, Quinn, and Archer, both children of Valkyries and already where Malin wants to be, she finds out that her mother isn’t all she is cracked up to be. There is also Oona, a sorceress in training that rounds out the group.  There could seriously be a love quadrangle at some point between these four.  Oh yeah, there is a lot of romance so this is best suited for older teens.

There is a lot of action and adventure as we follow Malin (love that name!), to the gates of the underworld as she tries to right a wrong and all because of her mother.  That internal struggle of Malin’s is the core of the story since she thinks her mother is perfect and when she finds that her mother actually has a slip of compassion, it tilts her worlds a bit.

The world building is quick and to the point and contains all sorts of multi-ethnic and magical creatures.  It hits a lot of marks when it comes to being inclusive with a bisexual main character and I wish that the world was given a bit more definition but then the book would have been a hundred pages longer.  The story was full of action and turned out to be a fast read for me!  I can’t wait for the conclusion because this left me hanging a bit. 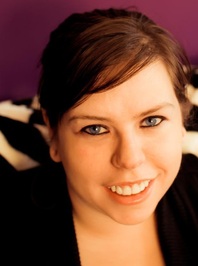 Amanda Hocking is a lifelong Minnesotan obsessed with Batman and Jim Henson. In between watching cooking shows, taking care of her menagerie of pets, and drinking too much Red Bull Zero, she writes young adult urban fantasy and paranormal romance.

Several of her books have made the New York Times Bestsellers list, including the Trylle trilogy and Kanin Chronicles. Her zombie series, The Hollows, has been adapted into a graphic novel by Dynamite. She has published over fifteen novels, including the Watersong quartet and My Blood Approves series. Frostfire, Ice Kissed, and Crystal Kingdom– all three books in her bestselling trilogy, The Kanin Chronicles – are out now.

Her latest book is Freeks – a standalone YA paranormal romance novel set in the 1980s that follows a travelling sideshow, and it is a available now. Her next books will be a duology about Valkyries. The first book  Between the Blade and the Heart will be out January 2, 2018, and the sequel From the Earth to the Shadows will be out March 27, 2018.

For more info about her and her books, here are some other places to check out and ways to contact her:

*Giveaway Ends 1.7.18 and is open to all who can legally enter.
Open to US Residents Only, sorry NO PO Boxes.
Must be over 18 or have your parents permission to enter.
An email will be sent and you have 48 hours to reply or a new winner will be chosen.
The Winner will be announced within 48 hours at the end of the giveaway.
Giveaway is organized by Bookhounds and sponsored by the Publisher (email Bookhounds@hotmail to verify if you won!)
It has no affiliation with Facebook, Twitter, Instagram or any other entity.
Void where prohibited.
Not Responsible for lost, stolen or misdirected prizes.**